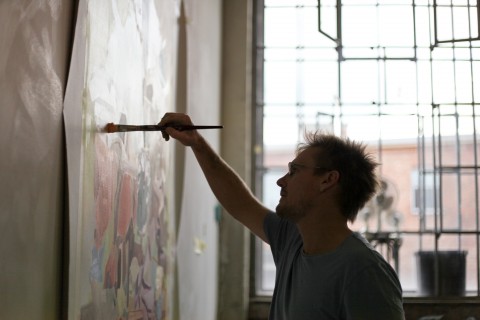 Stefan Dunlop is a guy who paints confrontational imagery in candy-toned colours. His facility with paint could really get him into trouble.

What I mean to say is: a huge part of his work’s appeal is its program of ‘seduce and destroy.’ Seduce by offering the eye unctuous passages of pastel-toned hues, laid down one next to the other in pleasing, rhythmic slices — reminiscent, to me, of Cézanne’s structured brushwork. And destroy  because once he’s reeled you in like a fish on a hook – BANG! – you’re left to deal with the uncomfortable irony of his chosen imagery, and the way his pictures insidiously mess with stereotypes, mores and political correctness. They make me angry. But I like that.

When he and I chatted, he told me he had, at one point, studied for five months at the New York Studio School in Manhattan. This makes perfect sense to me. Not only because of his naturalistic approach to figure drawing (The Studio School is a bastion of disciplined draftsmanship and hand-produced graphic composition), but also because his having spent that block of time in the City that Never Weeps with millions of hardcore tough guys and gals would have allowed his native, Antipodean, comic sense of the absurd to surface and blossom.

I haven’t yet encountered another Australian visual artist who allows him/herself to be so darkly, honestly conflicted in such plain view.

In Australian literature, sure, you meet this with authors like Peter Carey. But, please, will someone reading this suggest other artists in Australia who build a similar construct of pleasure and mordant sarcasm? The work of Richard Bell comes to mind — particularly his video Scratch an Aussie, 2008 — because Bell’s sensibility is also deeply grounded in trenchant wit and fearless piss-taking.

Dunlop’s a good painter and he knows it. He has earned this territory. I support his intuition that there has to be someone here in this neck of the woods holding a dialogue with art history and traditional painting — while also going for the gut.